Age is the most important factor impacting fertility. Age is associated with reduction in egg number and egg quality. The number of eggs remaining in the ovary constantly diminishes from approximately 300,000 at birth to 1,000 at the age of menopause.

For example by the age 35 the number of eggs remaining in the ovary is approximately half those present at age 25. Hence it is important for women to seek consultation as early as possible.

In addition to reduced egg numbers, the quality of the eggs is also lower with advanced age. The most important aspect of egg quality is the chromosomal complement of the eggs. Abnormal eggs carry or lack a chromosome or piece of a chromosome. For a not well understood reasons, the number of abnormal eggs increases with advance in age.

Diminished number of quality eggs with age reduces the chance for pregnancy, prolongs the time to achieve pregnancy and increases the risk for miscarriages, ectopic pregnancy and abnormal pregnancy outcomes. Fertility treatment is less successful with advance in age even when IVF is employed.

Ovarian reserve is tested by conducting a through: 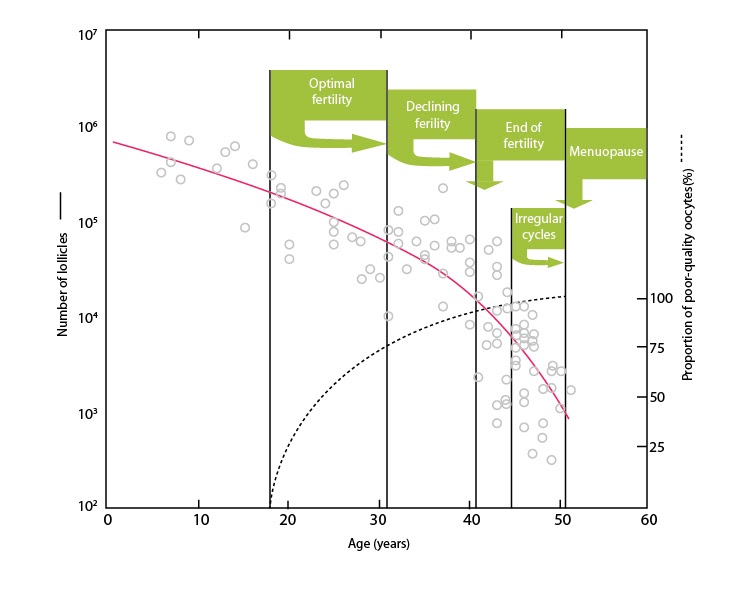 Detailed vaginal ultrasound to study the number of small follicles in the ovary. Only qualified reproductive endocrinologist can look at your ovaries and perceive important information about ovarian reserve

Blood work can also reflect ovarian function through measuring serum FSH, estradiol and anti-mulerian hormone (AMH). Tests for ovarian reserve reflect the number of eggs remaining in the ovary and possibly their quality but they are not accurate enough to determine if anyone should or should not undergo treatment. Many women with abnormal markers do get pregnant on their own or with fertility treatment. No woman should be denied treatment based on a blood test. The most accurate reflection of ovarian reserve is to actually receive fertility medications and observe for ovarian response.

Women may not ovulate due to a variety of factors:

Polycystic ovary syndrome: Probably the most common cause of anovulation. Diagnosis requires two of the following three criteria:

If you were diagnosed with PCOS we would like to assist with your reproductive health.

Hyperprolactinemia: Prolactin is a hormone produced by the master gland (the pituitary gland) in the brain and its excessive release hinders the development of the follicles and ovulation. This hormone is increased due to a small tumor in the gland or due to abnormal thyroid hormone function. Both prolactin and thyroid hormones are measured in the initial fertility workup.

Hypothalamic amenorrhea: usually develops in athletic women, women running several miles a day and women that are extremely thin and conscious about their weight and body shape. These women require special attention to general health and method of stimulating ovulation to achieve satisfactory outcome and maintain general and bone health later in life.

Premature ovarian dysfunction: Markedly reduced ovarian reserve can take place due to genetic factors, surgery of the ovaries, exposure to chemotherapy or radiation for treatment of cancer, lupus and other diseases.

The fallopian tubes are needed to pick up the egg from the ovary and convey sperm to the egg where fertilization can take place. They are blocked sometimes due to prior infection, surgery or congenital abnormalities.

Tube patency is investigated through a hysterosalpingogram (HSG).

If the fallopian tubes are blocked, they can be evaluated surgically through laparoscopy and sometimes the abnormality can be corrected. Alternatively, a couple may want to proceed to IVF if there is marked abnormality reflecting that surgery carries a lower chance for conception than IVF.

This is a dilated and blocked fallopian tube. The chance for correcting a hydrosalpinx into a functioning tube is very low and also carries risk for ectopic pregnancy.

In addition a hydrosalpinx may leak back fluid into the uterine cavity preventing implantation. For those reasons most authorities recommend surgical removal or interruption of a hydrosalpinx before proceeding to IVF.

Tubal Ligation Reversal: If prior tubal sterilization was performed before, consideration should be given to reversal of tubal sterilization if, feasible, after proper evaluation of condition of fallopian tubes, male and female factors. Alternatively, women may elect to undergo IVF and avoid reversal surgery.

The cavity of the uterus should be evaluated for factors that may hinder implantation of the embryo.

Gross factors such as sub-mucosal fibroids (just under the lining of the uterus) and polyps should be detected and removed prior to fertility treatment. One method for evaluating the uterine cavity is a simple test called saline sonography. It involves injecting a small amount of sterile water into the uterine cavity to clearly delineate abnormalities in the lining of the uterus. Most abnormalities inside the uterus can be corrected with minimal access surgery; hysteroscopy. Asherman syndrome or intrauterine scarring (adhesions) develop sometimes in women after D&C done mostly during pregnancy. It sometimes causes the period to be infrequent. It also can be corrected with minimal access surgery.

Some women are also born with structural abnormalities in the uterus. The most common of those is uterine septum; a vertical partition that divides the uterus into two cavities. The septum should also be removed before fertility treatment through minimal access surgery.

Other developmental abnormalities of the uterus should be thoroughly evaluated by a reproductive endocrinologist to determine the best plan of action prior to fertility treatment.

The pattern and thickness of the lining of the uterus should also be observed and optimized prior to and during treatment.

The cervix of the uterus also represents a special interest area. Prior to treatment the cervix should be visualized for any deformity. Trial transfer is an attempt to pass an empty catheter through the cervix to assess any anticipated difficulty in transferring sperm or embryos into the uterus. If prior surgery was performed on the cervix (e.g. cone biopsy) pregnancy may be disposed to the risk of preterm delivery.

Endometriosis means the lining of the uterus is implanted in abnormal places; the pelvic peritoneum, the ovaries, the intestines.

The implanted tissue responds to hormones and proliferates in response to estrogen. Endometriosis may affect fertility in many ways. It may cause scarring that blocks the fallopian tubes, decreases response of the ovaries, prevents sperm from fertilizing the egg or hinders implantation. In addition, endometriosis may cause chronic pelvic pain and pain on intercourse.

Women with mild endometriosis may benefit from enhancement of fertility through ovarian stimulation and intrauterine insemination (IUI).

On the other hand women with severe endometriosis blocking the fallopian tubes may require IVF.